If you plan to raise chickens, Crevecoeur chickens could be an ideal choice. If you have seen one or their photos online, don’t be discouraged. At first glance, they have faces that only mothers could love.

But then, don’t judge the Crevecoeurs because of their odd appearance. You’ll be surprised once you know what they can do well for you.

Crevecoeur chickens are a French breed that is very common nowadays. They have an unusual appearance and good temperament and are ideal even for beginners. Being one of the oldest chicken breeds, Crevecoeurs are not only decent egg layers and good for meat production; they can make good pets, too.

Without a doubt, this ancient breed has a lot to offer more than you can expect. Continue reading to help you know them better.

Where Do Crevecoeur Chickens Originate?

The Crevecoeur breed has been documented since the 12th century and is the oldest French chicken breed in England. It was imported to the US in 1852, 1867, and the 1870s.

Crevecoeur chickens are known for having compact, well-proportioned bodies, medium-sized but attractive crests and beards, and short legs. They also have reddish-bay eyes, black or dark horn beaks, black or dark leaden-blue legs and toes, and relatively long tails. Each foot has four toes. Their wattles, earlobes, and faces are small and bright red.

Crevecoeur chickens come in black, blue, cuckoo, and white. Nonetheless, the black variety is the most common and the only one to be admitted to the American Standard of Perfection back in 1874. Black Crevecoeur chickens have black feathers from head to body. Under direct sunlight, their crest and back may have some green sheen.

What Are the Distinct Characteristics of a Crevecoeur Chicken?

Aside from their striking body appearance and feather colors, Crevecoeur chickens have unique “V” combs, also known as devil’s combs. They also have pronounced beards that have three lobes – two muffs and a beard. Their beard also covers a large portion of the lower part of their faces, making their wattles and earlobes look smaller.

What Do Crevecoeur Chickens Eat?

Despite being a rare breed, Crevecoeur chickens don’t require a special diet. Like other chicken breeds, chicks between 8 and 12 weeks old should be fed with high-quality chicken starter feed.

Once pullets start to lay eggs, they need more calcium for stronger eggshells. For a balanced diet, give them grain, vegetables, and a healthy chicken feed mix.

How Long Does a Crevecoeur Chicken Live?

If properly cared for, Crevecoeur chickens can live between 5 and 8 years.

How Big Crevecoeur Chickens Can Grow?

Crevecoeur chickens are considered a small to mid-sized breed. Although the original ones from France are large, the modern American strains became smaller since they were bred as ornamental birds instead of meat producers.

Are Crevecoeur Chickens a Heavy Breed?

There are no records showing the average wingspan of Crevecoeur chickens.

What Is Crevecoeur Chicken Known For?

In general, Crevecoeur chickens are dual-purpose birds. They were originally bred for meat production in France since they have a high proportion of meat and offal (internal organs).

But again, the American strains were bred as show birds and are not famous as meat birds. Nevertheless, Crevecoeur chickens are considered good egg layers.

Crevecoeur chickens are now considered rare. As of posting, the Livestock Conservancy lists this French chicken breed as “Threatened.” It means that there are less than 5,000 Crevecoeur chickens worldwide, and less than 1,000 of them are in the United States. Fortunately, more American breeders are now interested in breeding them.

But because their beard and crest affect their vision, they easily get nervous or excited and tend to fly away. And yes, Crevecoeur chickens are a quite flighty breed.

Being active birds, Crevecoeur chickens love the free range and are decent foragers. Yet, they prefer being in confinement due to their sensitive crest.

But although hardy and can tolerate cold climates, Crevecoeurs also do well in warm environments. These rare chickens are also not known to be loud and noisy, except when hens are laying eggs.

Crevecoeur chickens are not considered aggressive. They don’t tend to be hostile towards humans, especially small children.

These crested chickens are also friendly to other breeds, especially the roosters. However, their head feathers are a favorite target of bully chicken breeds. Therefore, you should avoid mixing them with larger breeds.

How Many Eggs Do Crevecoeur Chickens Lay?

Crevecoeur chickens are generally good egg layers and can lay 120-150 eggs a year. This is equivalent to an average of 3 eggs a week. Yet, they can lay eggs continuously even in the winter.

Hens are moderately broody and will defend their nest if you try to get their eggs. But then, they are not exactly good mothers and don’t sit on eggs that long.

Crevecoeur chicken eggs are white to tinted, medium to large, and weigh around 55 grams (2.0 oz). Interestingly, American Crevecoeurs are among the few chicken breeds that don’t have white earlobes but lay white eggs.

Crevecoeur chickens are quite easier to manage, as compared to other crested breeds. Aside from having a good temperament, they are also adaptable to extreme weather conditions.

Although they are not excellent egg layers and not the best in meat production, Crevecoeurs are ideal pets and companions and can excel as show birds.

Raising Crevecoeur chickens can be done by beginners with less effort. These odd-looking birds are relatively healthy and resistant to diseases. However, you should be protective of their crest and beard. Although these traits are head-turners, they can be a hindrance in some situations. Here are some simple tips on how to care for Crevecoeurs: 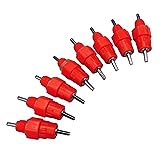 How Much Is a Crevecoeur Chicken?

The cost of Crevecoeur chicks depends on the location of the breeder and how many pieces you will buy. As of December 2022, the price range per male chick is from $4.61 to $5.37. Female chicks range from $7.34 to $8.56, and unsexed chicks cost $5.82-6.78 each. Make sure you buy quality chicks only from reputable farms and hatcheries.